An Interview with John Alvin: From Blade Runner to Star Wars to E.T. 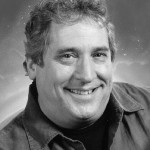 An interview with famed movie poster artist and friend of the Artinsights gallery John Alvin, where he discusses his inspiration for the many poster one sheets that he has created over his storied 35 year career, with Cinema Siren Leslie Combemale.

John Alvin was a famed cinematic artist and painter who created some of the world’s most iconic movie posters. Originally working as an artist and animator, he got his first official start on movie campaign art for the poster for Mel Brooks’ Blazing Saddles in 1974. Because movie posters back in those days were the preeminent way to advertise a new film, often appearing in newspapers and billboards, Alvin’s poster and Alvin himself quickly got noticed by other movie studios. This led to a long 35 year career producing movie posters as well as working on major American films ranging from Star Wars to Disney films.

John has worked on and produced artwork for over 135 film campaigns over his career. Some of his most famous posters include the iconic poster for Steven Spielberg’s ET: The Extraterrestrial, ET and Elliot’s fingers are about to touch. Alvin also produced iconic posters for Blade Runner, Predator, Alien, Batman Returns and Jurassic Park. For more information and examples of John Alvin’s artwork, go to his artist page on the Artinsights website.