The Boxtrolls: Laika wins again…more with visuals, less with story

What exactly is it about the English and cheese? From Monty Python to Wallace and Gromit to the novel Here Be Monsters by Alan Snow on which the new Laika feature The Boxtrolls is based, there is a decidedly cheddar-like whiff coming from the general direction of the British isles. In this new 3D stop motion/CGI animated feature, the haves of the village of Cheesebridge, led by “White Hat” Lord Portley-Rind (Jared Harris) have a diversity and copious amounts of cheese, the have-nots, including baddie Archibald Snatcher (Ben Kingsley) must largely live without it.

There are a creepy-cute bunch of cave-dwelling trolls who wear boxes like turtle shells, speak in gibberish, and eat bugs, and they are recycling, fixing, or transforming trash and junk into useful items and inventions. They have names like Fish, Wheels, Bucket, Shoe, and Sparky. Human boy Eggs (Isaac Hempstead-Wright) is embraced and adopted into this collaborative and familial collective as a baby and grows to pre-teen living as a Boxtroll. These quirky creatures are all male, it would seem. Imagine Snow White but with trolls mining trash, instead of dwarfs mining jewels. They are not monsters that steal kids in the dark of night, as the villagers have been led to believe, they are kind, sweet and a little silly, and fiercely love and protect Eggs. 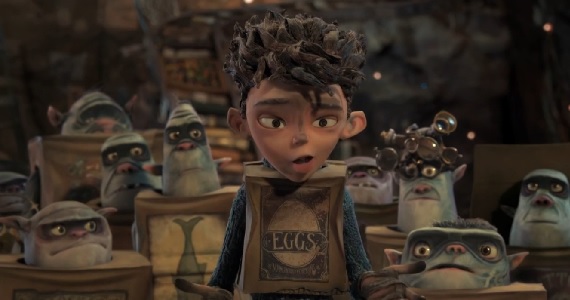 Archibald Snatcher, browbeats his fellow “Red Hats”, highly entertaining, scene-stealing henchmen Mr. Trout (Nick Frost), Mr. Pickles (Richard Ayoade) and Mr. Gristle (Tracy Morgan) into helping him in his quest to eradicate all Boxtrolls from the vicinity. He is promised by Portley-Rind he will be given a white hat and great gobs of cheese as reward. Those poor Boxtrolls and their boy Eggs must find a way to survive this mad troll hunt, aided by Egg’s first human friend Winnie Portley-Rind.

While in terms of story, this isn’t the best fare offered up by Laika, the subversive underdog of the animation world that brought us Coraline and ParaNorman. It is still a rewarding visual experience, is charming enough to keep the attention of their fans, and represents yet more creative advancement. Surpassing the first two films would have been a tall order. ParaNorman is an underrated and exceptional film that stretched into new territories blending 3D printing, stop-motion, and CGI. The Boxtrolls advances those same techniques, while largely limiting the color palette, Dickensian-style, to the shades in a crust of bread on faded china. The laborious nature of stop motion animation, a technique used all the way back in the 1930s for King Kong and even before, will never be relieved. It takes a week to create only 2 minutes of film, and therefore must be done with patience and love of the project. That love, as with any art that requires a physical touch, is evidenced in every frame, every of its 79 sets and its over 20,000 props. 3D printing aids in the stop motion by allowing every single expression for the characters to be represented and utilized. Each change is done by an animator manipulating them by hand, including eyebrows, ears, and lips. Much like childbirth, if these artists knew how long it would take and how detailed the work would become, they might consider giving up. At the end, however, there is a beautiful creation to show off and in which to take pride.

Perhaps I’m one of those filmgoers who always find dark symbolic layers wherever they look, but I saw elements that paralleled the Warsaw ghetto during the Nazi occupation. Those “red hats” and their leader really are looking to crush every last Boxtroll, who seem to represent an impoverished clan just looking to joyfully keep to themselves and not make waves. There is even a running bit with Snatcher’s henchmen questioning the morality of their collaboration with him. The Boxtrolls could also be standing in for the people in England trying to survive WW2 in bomb shelters, inventively making due with very little. Your kids won’t pick up on that, just on the need for a family or community to stick together and support each other. What lacked hook for me in the dearth of story was made up for by this subliminal history lesson, whether intentionally injected or not.

You may go to marvel at the minute detail and love with which Laika animators created the world and characters of Cheesebridge, the layered messaging, or you go just to enjoy a fun story with bug-loving trolls. If you do, remember to stay through the credits. You’ll see a little of just what goes into all this animated magic. 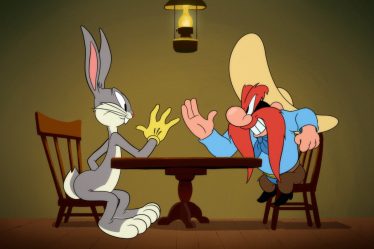