Cabin in the Woods: A Genre-Busting, Blood-Soaked, and Great 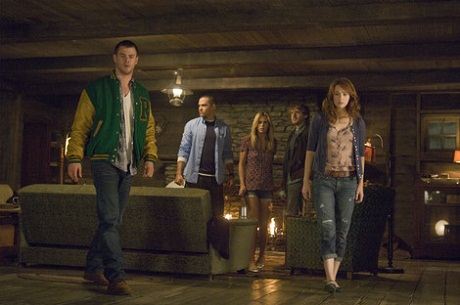 Joss is boss. Or so say his devoted fans, many of who make up the “Whedonites” and “Whedonistas” in the “Whedonverse.” You don’t hear about directors like Hitchcock and Tarantino having fans called “Hitchcockers” or “Tarantinites”, and both those directors have a strong cult following… That’s saying something.

The new yet long awaited genre busting horror flick The Cabin in the Woods has a built in fan base just by having been co-produced and co-written by their Geek God Whedon. But for the rest of the public, the non-Whedonevangelists, is it worth seeing?* After sitting on a shelf for almost three years, a result of their original studio MGM’s demise, Lionsgate bought the rights and is making The Cabin in the Woods its first post-Hunger Games release. That suggests they have great confidence in its success via word of mouth and positive review.

So what the heck is all the fuss about?
You’d think we’d all know the whole plot by the trailer. Four hotties and one geeky stoner (the preferred & usual visual cocktail for horror films), inclusive of a pre-Thor Chris Hemsworth and Grey Anatomy’s Jesse Williams, go out into the woods to a remote and suspect looking cabin. In the woods. And, as if they hadn’t seen any horror movies, proceed to do things like root around in a cellar full of chains and creepy baby dolls, and ignore an oil painting of goat-headed demons eviscerating each other. Stupid horror cardboard characters, they get what they deserve…right? You’d assume the rest would be horror movie history.

You’d be wrong. Things get ugly, yes, but there’s way more to the story, a story that turns the usual Saw-inspired grotesquery on its head. The horror movie odes are all over the place. For horror fans in the know, there are visual references to Evil Dead, Night of the Living Dead, and The Shining. There’s plenty of blood, but also lots of surprises. There are some laughs and some scares, although not too many of either to preclude interest by both traditional horror fans and those who generally avoid the genre altogether. If I’m sounding vague it’s because the film is so rotten with spoilers, to mention anything more than a plot skeleton is to ruin the whole movie for first-time viewers.

In addition to the cabin construct, there is a Truman-show aspect that involves folks in lab coats manipulating dials, switches and computer software. They include heavy hitting actors Bradley Whitford and Richard Jenkins, the latter of whom was reported to have said yes to his role after only having the script for one night. It may be more convoluted and have more thrown into it than you can shake a bloodied blunt object at, but it is entertaining from beginning to end. 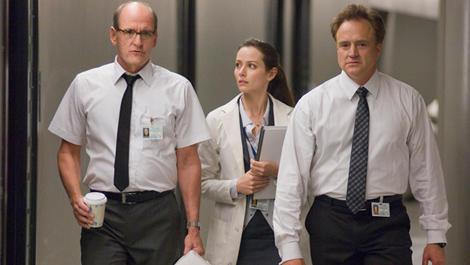 One thing Whedon and writer/first time director Drew Goddard are great at is finding and exploiting new talent. They auditioned hundreds of actors for the lead roles, and their acumen and patience are rewarded with fine acting, especially by Kristen Connolly and Fran Kranz. No acting slouches themselves, Connolly just finished playing Cordelia against Sam Waterston in King Lear and is currently filming a new series for David Fincher, and Kranz is on Broadway in the Mike Nichols directed version of Death of a Salesman. We already know what happened to Chris Hemsworth in the last three years. He’s about to be Thor in Marvel’s The Avengers, directed and co-written by Joss Whedon.

For those Whedonites out there, it will be fun to recognize the actors you know from Buffy, Angel, or Dollhouse, like Whedon favorite Amy Acker, in cameos and small roles. The script is very Whedonesque. Which, to you norms, means the dialogue flows really well, the characters are well developed, the plot has “kitchen sink” convolutions, and there are lots of bizarre unforeseen twists. 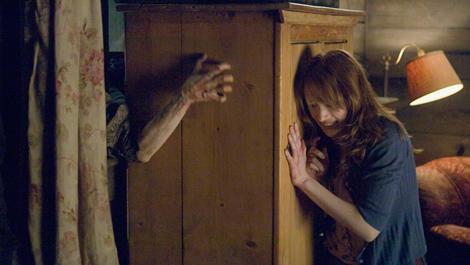 All in all, (and I should be commended for reviewing this movie without any reveals), I’ll just say its the kind of ridiculous entertainment that movie lovers out there willing to completely suspend disbelief will walk out of chuckling and shaking their heads, mentally committing to the purchase of the DVD.

And thanks, Lionsgate, for rescuing 2 highly entertaining hours of bloody good fun for our viewing pleasure.

*Full disclosure, Cinema Siren is a Whedonista and sports a “Browncoat” bumpersticker—a reference to the Joss Whedon show Firefly—on her Prius.

• Interviews with Whedon and Jenkins on MSN.com and on Collider.com. 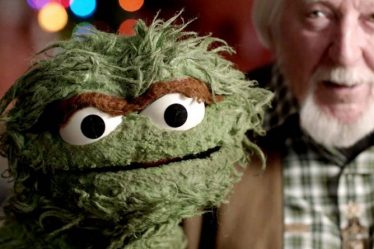