Call Me By Your Name Review: A Transcendent Tale of Two Men in Love

This weekend, Call Me By Your Name, the spellbinding meditation on coming-of-age as a gay young man in 80s rural Italy lands in art houses around the country.  It is a lyrical, mesmerizing, experience at the cinema that numbers among the best movies of the year. It is also one of the most moving portrayals of gay love ever released on film.

In 1983, twenty-four year old graduate student Oliver (Armie Hammer) comes to the Italian countryside to work with a professor, Mr, Perlman (Michael Stuhlbarg), stays with his family, and commences to engage in an intellectual sparring match and cultural excavation with his mentor.  Oliver also tumbles, in what feels like beautiful slow motion, into love with Perlman’s seventeen year old son, Elio (upcoming A-lister Timothy Chalamet).

The film is directed by Luca Guadagnino, and written from the novel by Andre Aciman. Worth noting, and from my estimation, important to the validity of this artistic enterprise, is the fact that Guadagnino and Ivory are gay men. That’s not to say that it is essential, but as a valuable step in cinematic storytelling which represents positive LGBTQ experiences, I’m glad it is being told by members of that community.

Armie Hammer shows himself deserving of the continued promotion as both lead and character actor in film.  Like his co-star in the recent The Man from U.N.C.L.E., Henry Cavill, he has had a number of false starts, and, similar to Cavill, struggles against being pigeonholed in pretty-boy roles.  Hammer does, however, once again prove he can actual act. As Oliver, he shows nuance, takes risks in his acting choices, and finds an economy of movement within his substantial 6 foot 5 inch frame that drives audience attention to what is important in each scene. Were it not for the exquisite performances by Sam Rockwell in Three Billboards Outside Ebbing, Missouri and his co-star in Call Me By Your Name, Stuhlbarg, I’d put him at the top of the list for winning a Best Supporting Actor Oscar.

Sporting shorts so short it apparently required digital intervention by the director, and dancing with unabashed abandon to The Psychedelic Furs’ “Love My Way”, word of Hammer’s magnetism will likely attract a fair number of people into the theaters.  As Oliver, he switches believably between playing the aloof brainiac and heartbreaking goofball.  Elio never stands a chance. 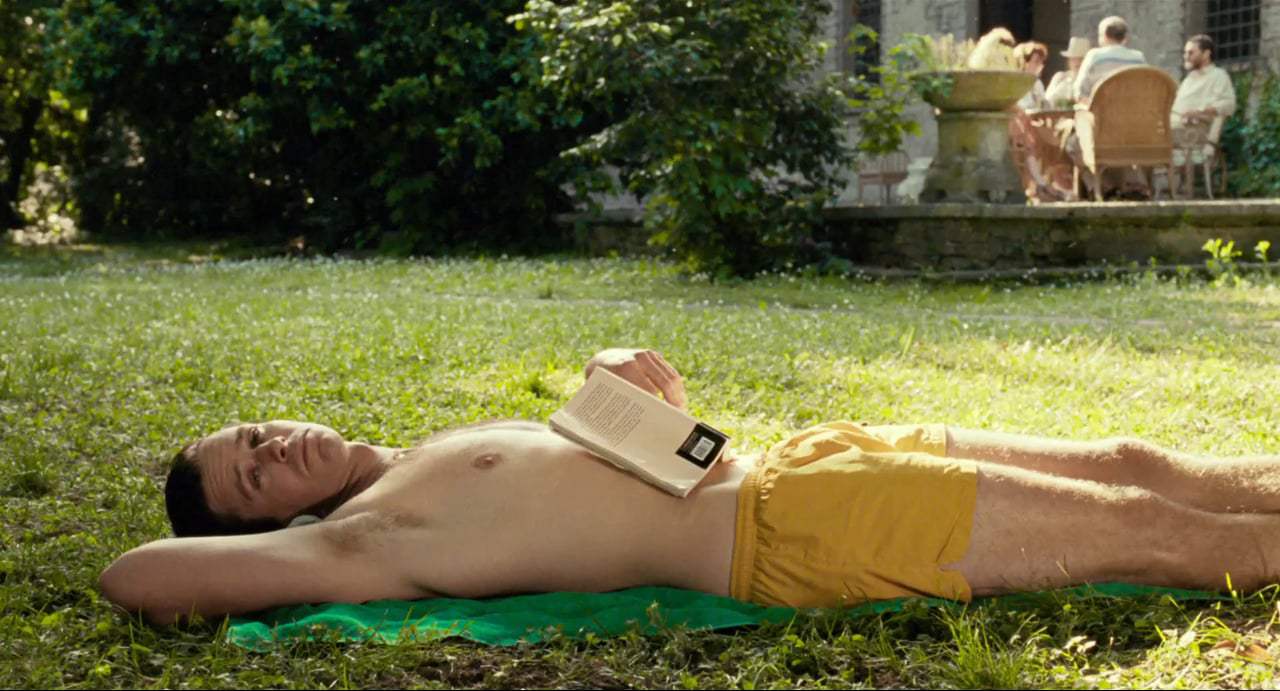 Chalamet is all over 2017, with roles in the critical darling Lady Bird, and Hostiles, starring Christian Bale, but he best showcases his talent and potential here as Elio. He makes portraying the confusion and intense desire of a seventeen-year-old falling in love for the first time look authentic, which is essential to the film getting under our skin. He is especially impressive when sharing the screen with the far more experienced Stuhlbarg.  The highlight of the movie is the powerful scene between these two actors that will resonate with anyone who ever looked for parental advice and approval. 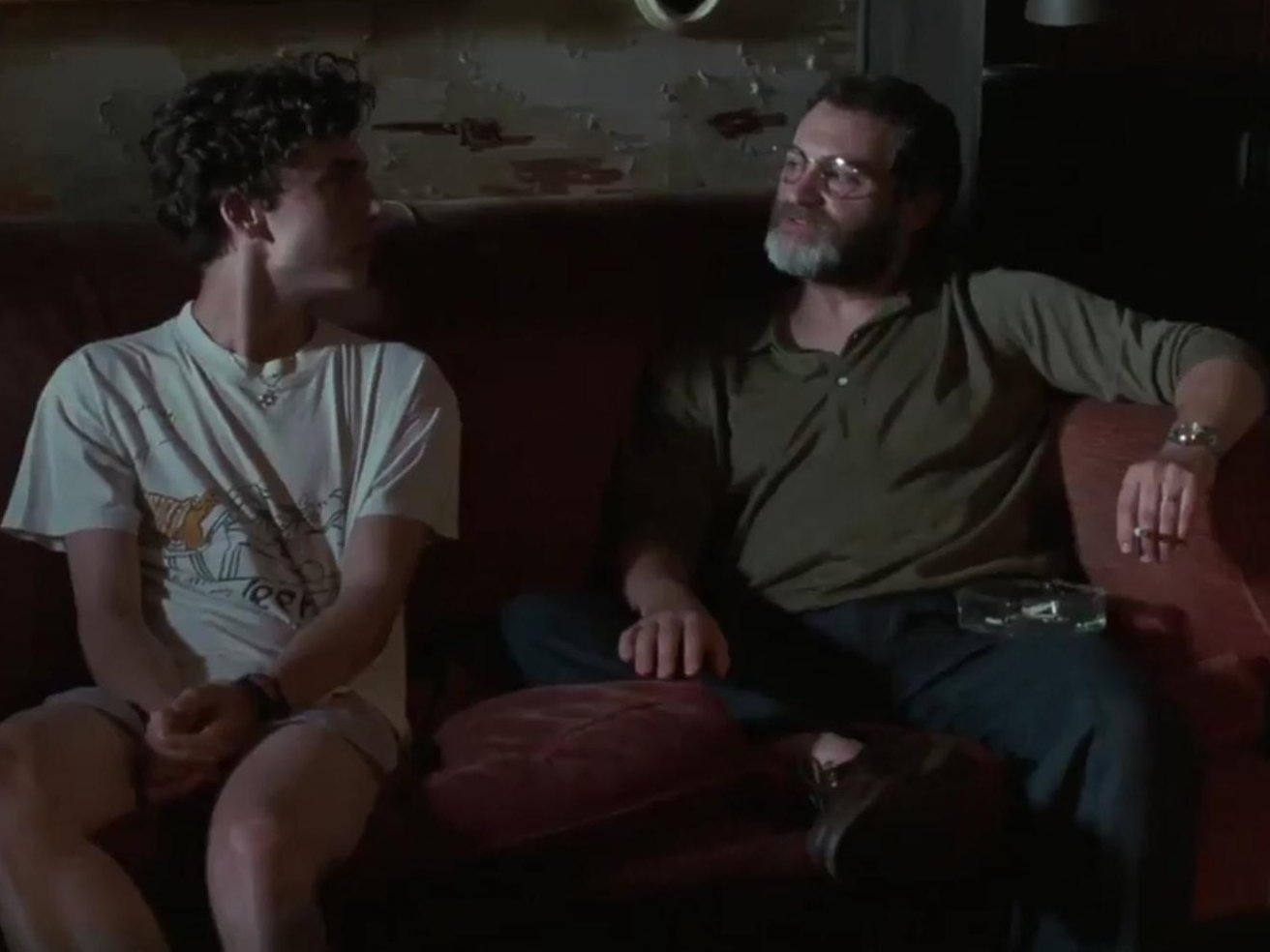 I was Elio’s age in 1983, lived in France and Italy, and fell in love for the first time with a twenty-four year old, but in my case it was with a Greek boy named Kostas.  Living through a passionate relationship as a young man coming to terms with his gayness is, in many ways, different from my experience.  Still, the basics are the same. “Love is love is love”, as they say, regardless of orientation. Anchoring the film in that truth is what makes it work so splendidly, and will give it longterm resonance for every viewer in the audience.

Viewers will connect with to the romance, the lust, and the excitement. Those “of a certain age” will also recognize how well the film captures the time period, atmosphere, and music.  Yes, it IS a movie about being gay, but it is equally about falling in love, identity, self-awareness and acceptance. Anyone who has ever had a first love will relate to it, and find it both poignant and affecting.

That being said, it is about two men. I spent a fair amount of time being distracted by the concern they were going to kill one of them off, so I was relieved that the filmmakers didn’t feel the need to turn Call Me By Your Name into yet another cautionary tale.  My gay friends know well enough what they risk societally, just by being themselves and falling in love.  This is not Brokeback Mountain.  If you ugly-cry at the end, it won’t be because one of the leads are beaten to death.  It will be because through Call Me By Your Name, you remember the truth of what first love is like, with all its pain, beauty, suffering, and joy.

@burrow @pixelpreaching @roxana_hadadi The world to the #Oscars:

You know there are women and POC making great movies, right?

We see your #OscarsSoWhite and #OscarsSoMale, and raise you
11 Jokers and 3 Bombshells.

“HIRE US: Our stories — not just of our abuses but the ones we have inside of us, bursting to get out, filled with creativity, humor, drama, and pathos — will make the world and the art we create better. We will make you lots of money and you will be doing the right thing.” https://twitter.com/TheWrap/status/1215736133776134144