There isn’t one critic who doesn’t weigh in at Oscars time. We all want to guess, as do those of you who make an effort to see as many good movies every year as you can, how the Academy will vote. Will the best movies actually be awarded? In some respects, it seems like every year that question has already been answered in the negative, the day after the nominations. As many people (including me) bemoaning the Selma snubs will tell you, though The Academy of Motion Picture Arts and Sciences doesn’t publish a membership list, a study in 2012 showed an overwhelmingly male membership (77%) with a median age of 62. Blacks and Latinos both make up less than 2%. That explains the often predictable and the, shall we say, ‘vanilla’ choices in nomination, and makes guessing winners within that list easier than it should be.

That being said, one of the lovely aspects of this year’s Oscars (apart from the fact that it is being hosted by fan favorite Neal Patrick Harris) is that so many independent movies are vying for top honors. Boyhood, Birdman, and Whiplash were all introduced to audiences at last year’s Sundance Film Festival.

It remains a little ridiculous to compare the quality of acting, directing, writing, and other arts when such a diverse collection of films is released every year. Still, getting recognition from the Academy can boost a film’s box office significantly, and for independent movies, that can make the difference for the upward trajectory or even financial solvency of the filmmakers. That doesn’t meant that a successful studio film as great at Guardians of the Galaxy or Into the Woods, Gone Girl, or The Lego Movie should be ignored.

For some of us, no matter how predictable or badly chosen some of the winners are, the Oscars is our Super Bowl. We make special drinks, we tweet, and we yell at the screen, possibly more than any football fan. This year, I, Cinema Siren, invite friends and fans to join me as I live blog during the red carpet arrivals and the main event. There will be some moments of silence, and some TEXT SCREAMING, and some lively exchange of opinion. Please come to our party! You can wear a sequined gown or a night gown, a tiara or just a towel. We’ll never know.

*Thanks for all who took part in the live blog and chat during the EXTREMELY LONG Oscars last night!  Around 10:45 I threw in the towel, but had only missed 3 of my predictions…then Birdman blew two more!  I don’t mind, I loved that movie, but Boyhood is more than just a trick.  Congrats to all who won, whether I guessed it or not!

Here now are my predictions, in bold, for winners this year, with a few comments here and there. The good news is the losers get a swag bag with $187k worth of products and vacations, albeit including a $20k astrological reading (!!??!!) 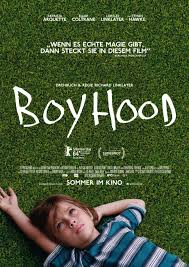 *Boyhood has won many times already this awards circuit, but so has Birdman. Both are very inventive in different ways, but I believe Boyhood director Linklater’s 12 year cinematic journey will end with a trip up to the podium with the film’s producers.

*If justice exists, much as I personally prefer Birdman, Boyhood deserves recognition for its spectacular commitment and authenticity.

*All these actors did a fine job in their respective films, and I’ll say again that David Oyelowo who starred as Martin Luther King in Selma is an unforgivable snub, but Redmayne should win for his contortions alone. It may be playing to the predictable ‘physical challenge’ card so popular with the Academy, but sometimes those portrayals are worth a win, and this is one of those times. If Keaton, the other favorite, doesn’t win, we can all still welcome him back to the top of the A list, as he has proved time and again he is a talented fellow indeed.

Supporting Actor
Robert Duvall in “The Judge”
Ethan Hawke in “Boyhood”
Edward Norton in “Birdman or (The Unexpected Virtue of Ignorance)”
Mark Ruffalo in “Foxcatcher”
J.K. Simmons in “Whiplash”

*If someone else wins this other than Simmons, expect frogs to fall from the sky. 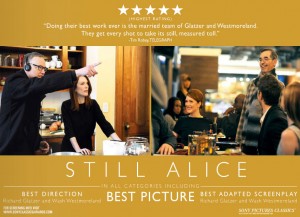 Actress
Marion Cotillard in “Two Days, One Night”
Felicity Jones in “The Theory of Everything”
Julianne Moore in “Still Alice”
Rosamund Pike in “Gone Girl”
Reese Witherspoon in “Wild”

*Rosamund Pike has won a few awards this season, and since her portrayal in Gone Girl is integral to the film’s success, she deserves them. Julianne Moore has come a long way from the miniseries and movies of the week dotting her early career. She makes a sad, poignant story nearly excruciating to watch.

*Again with the frogs. Go Arquette. She has been an actress who has aged well onscreen while maintaining her grace and authenticity.  Boo to the Academy insider who was quoted as saying her wins this season are “Bravery Awards” for going 12 years without doing plastic surgery. 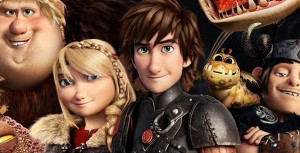 *The Lego Movie is missing. It probably would have won this award, but the knuckleheads who didn’t nominate the movie in the first place wouldn’t have voted for it, obviously. All fine choices in this category, but Big Hero 6 and How To Train Your Dragon 2 have the most likelyhood of winning. 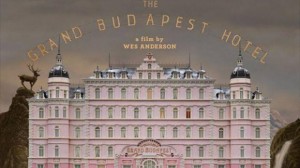 *while i’d vote for Leviathan, Ida likely has more views by voters, and right now Russia is not particularly on the US Love list. While that shouldn’t be reflected in a snub to its filmmakers, these are old white men, so….

*At some point, the Academy has to recognize perennial bridesmaid Desplat, who does amazing work that has been oft nominated, never awarded. Let this year be the year he wins. 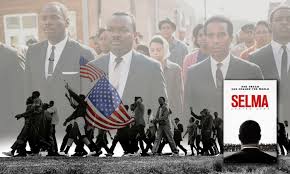 *This is where the meager, begrudging recognition of Selma will take place, if anywhere.  For god’s sake, white people of the Academy…give this great movie a teeny tiny something.  Glen Campbell would be a wonderful alternate, for obvious reasons.  Or perhaps they can write a song called “Where’s the Playground, Selma?”

If there’s one place where the films of Wes Anderson always excel, it’s in the production design.  The Imitation Game is also lovely to look at, but Anderson’s film has not a hair or hat out of place.

*I would vote for either Birdman or Whiplash in both of these categories, but here is the opportunity for the voters to throw a bunch of love at a film not nearly as lauded by critics or artists but that fared far better in the theaters, regardless of politics.  And the sound in American Sniper was good, however, I’d say Live, Die, Repeat, (or whatever they are calling that film at this point) had impressive sound design.

*Here is a case where the visual effects altered understanding of how cosmologists thought of black holes.  Doesn’t that deserve recognition?  Art didn’t just imitate life, it advanced it…. 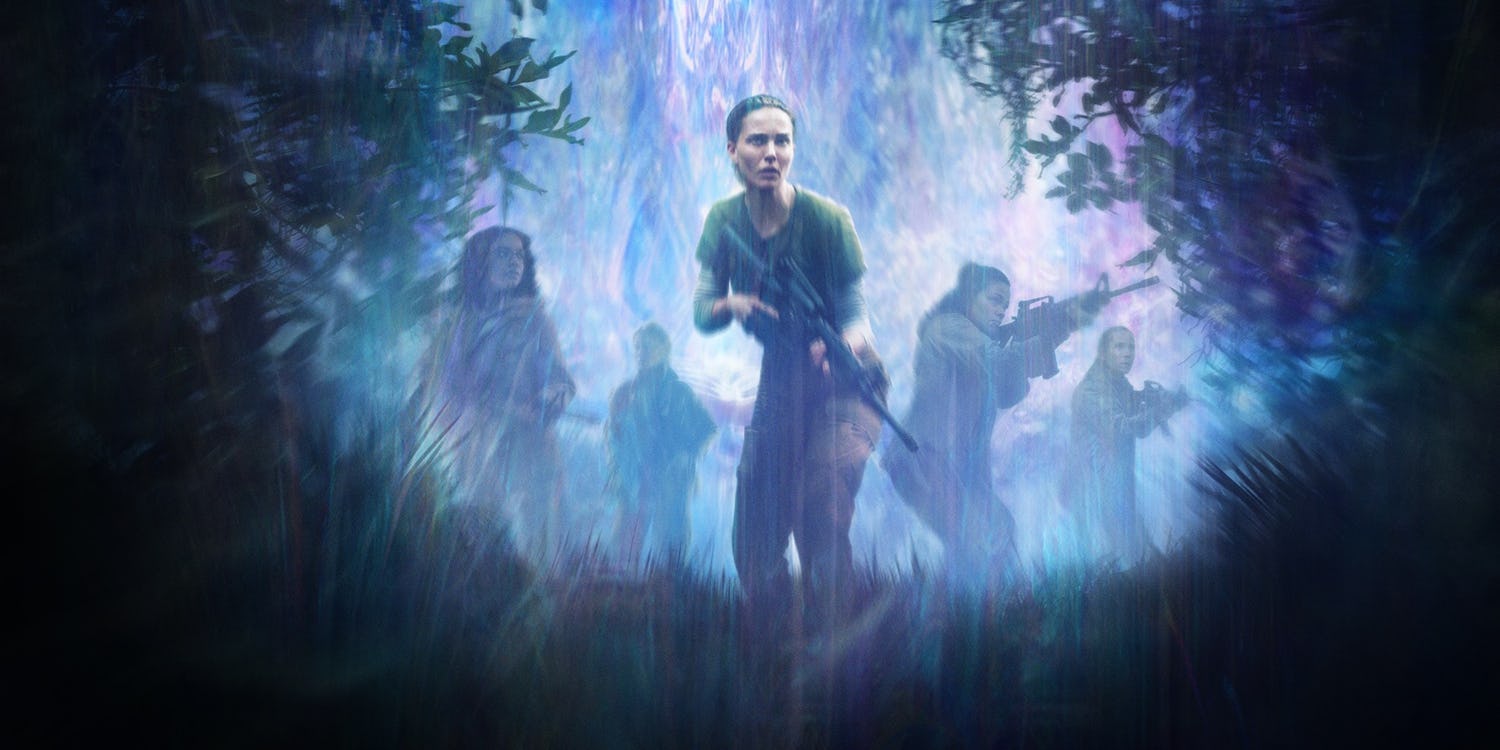