HOW TO TRAIN YOUR DRAGON: How to Train an Animator 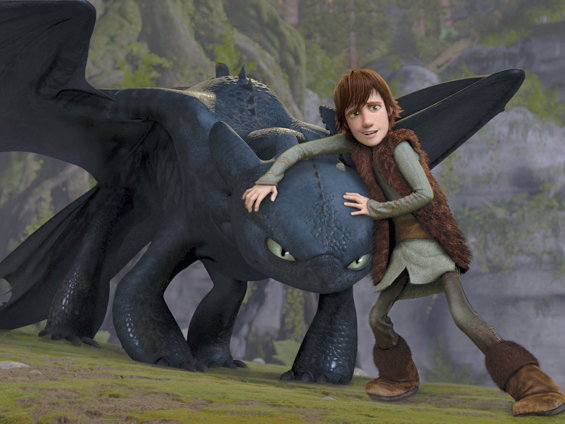 Do they sell these at pet stores? If so, does a training manual come with?

If you need confirmation that a $16 Imax 3D movie is worth the time and money, let me submit for your approval, the visually stunning and exciting charmer of a movie, “How to Train Your Dragon”.

Welcome to Berk, a craggy village on an island off the coast of Scotland, where the men are Vikings and the sheep are nervous. Rightly so, given they get picked off at an alarming rate by dragons of varying size and breed on an almost nightly basis.

It’s no wonder the villagers and its chief, Stoick (Gerard Butler, in 300 mode and using his Scottish burr) take the business of wiping them from the face of the Earth so seriously. Unfortunately, the chief’s son and lead character, Hiccup (“She’s out of your league” star Jay Baruchel) doesn’t measure up to his dad’s brawny testosterone laden standards. He’s more inventor and lover than Viking warrior. When one of his inventions inadvertently injures the rarest of dragon breeds never before seen by the village population, he goes to investigate the damage he’s done. Finding a hurt creature acting nothing like the monsters he’s been lead to believe all dragons to be, his compassion gets the better of him, and a boy and his dragon pet story is born.

Soon he realizes he must win over the entire village to his way of thinking about the dragons and what he’s learned about their true nature. This includes the group of other Viking teenagers, especially his crush and dragon killer in training Astrid (America Ferrera, sporting an awesome outfit, and this year’s coolest potential Halloween costume). His required training on how to kill dragons is conducted by Gobber, (Craig Ferguson, begging the question why they didn’t enlist Ewan McGregor for a trifecta of Scotsman actors) and the scenes in Gobber’s dragon killing bootcamp offer smart, funny dialogue, and classroom rivalries played out with shields and weapons instead of calculators and books. The winner of the training gets to kill a dragon. Oh no! Will Hiccup win and have to kill one of his new friends, or face further rejection by his own father? Of course, this being a computer animated cartoon, it all works out in the end, but not without some exciting mayhem and destruction, all captured in 3D.

The scenes of Hiccup’s learning about his new friend “Toothless”, and slowly earning his trust, are worth the price of admission alone. Reminiscent of an animated “Black Stallion”, animal lovers will fall instantly in love with this dragon, recognizing many of their pets’ most endearing traits in him, which are portrayed spot on by the animators. But the flying scenes are what really stand out the most, potentially making you shell out another $16 to see it again in IMAX 3D, and buy it on DVD. Inspiring, exciting, and gorgeous, they will ignite the most jaded kid’s imagination, and remind the adults connecting to their own childlike wonder is only a great movie away.

The movie’s message, and all big studio animated movies must have one, is more or less the usual “vive la difference”, about acceptance of our differences. That acceptance, especially by members of our own families and inner circle, makes for a stronger, richer clan. The movie also teaches open-mindedness, as it takes Hiccup’s showing the true nature of the dragons, so misunderstood, to the villagers for them to truly understand them.

Ever since Luxo Jr. made his first appearance for Pixar, the experimentation in computer animation has been advancing the look of animated movies so rapidly the slack-jawed viewing audience can barely keep up. There are worse problems for moviegoers to have.

Between the art direction, visual effects, and animation, the look of the entire movie raises the bar of how beautiful and believable a computer animated film can be. The color palette of the establishing shots, scenes of the village, and dragon training countryside are on par with the best of the most lauded of Dreamworks animated offerings, Kung Fu Panda, and that’s saying something. Some close ups, the hair on Stoick’s arm and scenes of the ocean for example, surpass anything i’ve seen. Check them out, some lowly animators will appreciate you noticing their superb work!

Animators work for years on the films they create. It has to be a labor of love. You can see that the animators who worked on How to Train Your Dragon loved every minute of making it. In Hollywood, movies often makes big promises of enlightenment and meaning, but sometimes they just want to be something beautiful and sweet and fantastical, something for us to make us feel good and have fun. How to Train Your Dragon delivers on that promise.