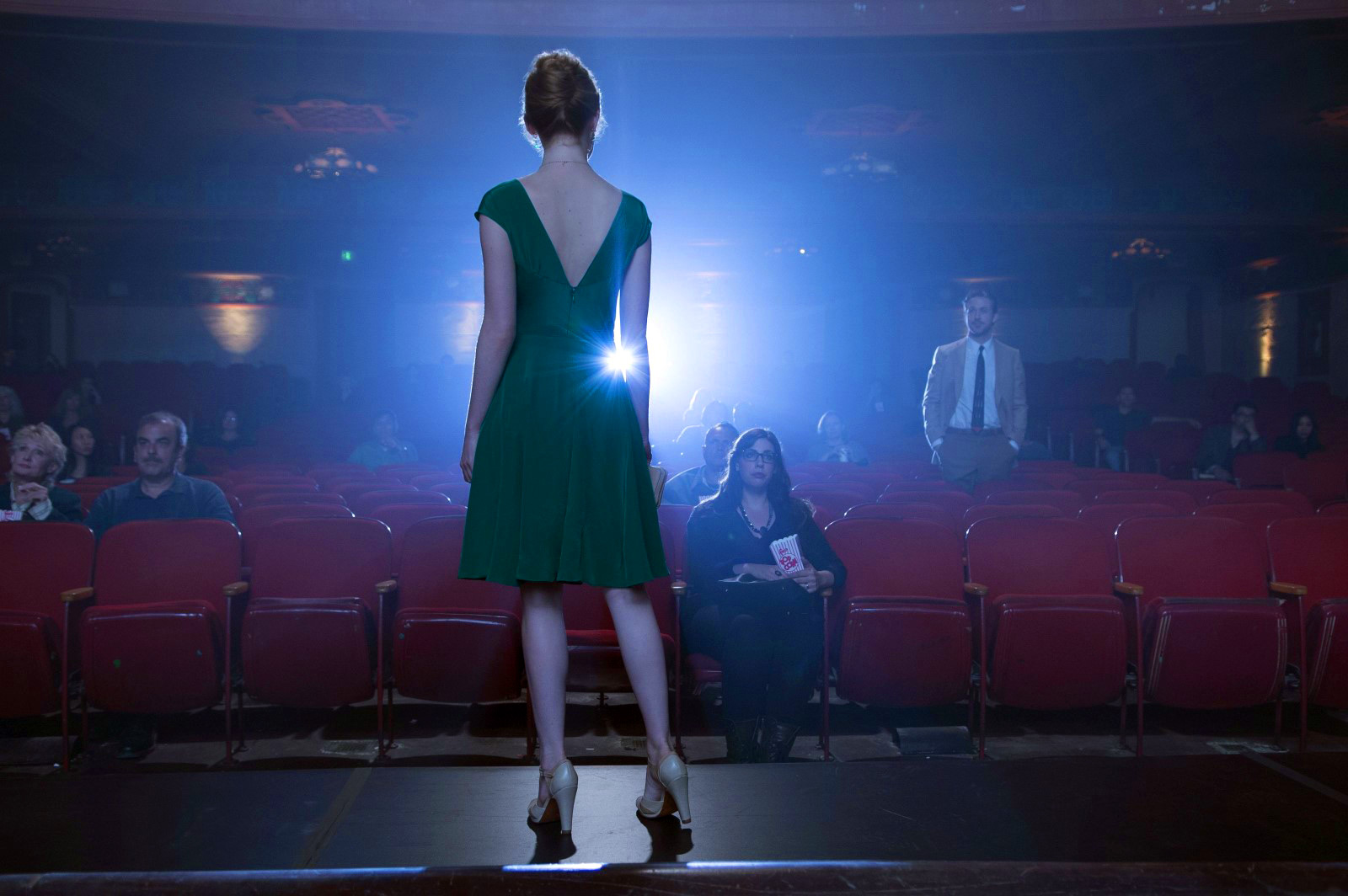 You’ve seen Rogue One.  Now what?  How about seeing the movie that will likely win Best Picture at this year’s Oscars, and might even become you new favorite movie?  How about a movie that is so wonderful, even advance buzz didn’t crush the enthusiasm of hundreds of critics around the world?  Presenting LA LA LAND.

While Damien Chazelle, director of the Oscar winning WHIPLASH has build his dream project as a story that has its share of heartbreak, LA LA LAND never stops being a joy to watch.  As a film being released during awards season and for several other reasons, what we have here is a cinematic unicorn.  Director Damien Chazelle has made a musical for the 21st Century with romance as its central theme that both men and women will love, and he made it for an estimated thirty million. More than just a wannabe blockbuster, like some fictional producer in a Busby Berkley or 50s MGM film would say, “it’s got heart”.

From the spectacular Cinemascope pre-credit opening sequence, a seven minute song and dance scene of an LA traffic jam using over 100 dancers and filmed using a single shot, LA LA LAND captures its audience and keeps it hypnotized through its 128 minute running time.  The story is of aspiring actress and jazz musician Mia and Sebastian (or ‘Seb’) played by Emma Stone and Ryan Gosling, respectively.  They meet and fall in love as they struggle to succeed in the cruel, pretentious world of music and film in Los Angeles.  Chazelle has a knack for both pointing to the absurdity and mercurial nature of Hollywood, while still delivering a valentine to LA.  No doubt both transplants and natives will nod their heads knowingly, as most residents have their own love/hate relationship with the city. 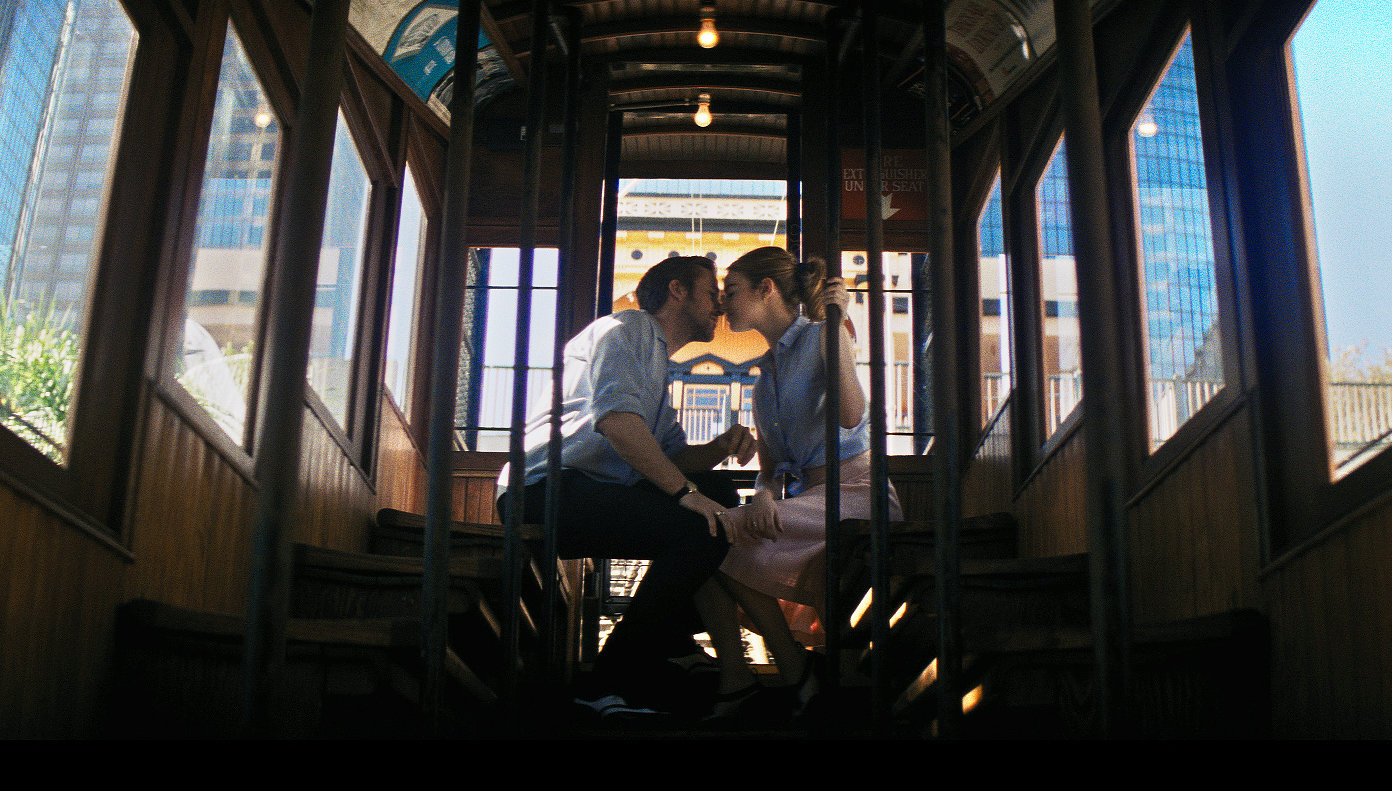 Reverential and clearly made by someone with a love of and deep knowledge of movie musicals, LA LA LAND makes so many references to classics, it will keep even the ultimate musical geek smiling.  The most recognizable are those coming from Gene Kelly movies.  You’ll see Gosling swinging on a lamp post, and revel at a sequence that recalls the Broadway Melody number in SINGING IN THE RAIN.  There are also clear influences in LA LA LAND’s ‘Epilogue’ where Gosling and Stone interact in the same sparse environments seen in the ballet sequence in AN AMERICAN IN PARIS.   Stone’s enthusiastic dancing in a jazz club recalls Audrey Hepburn’s cafe dance scene in FUNNY FACE.  Her girl’s night out references several scenes from SWEET CHARITY, including the Bob Fosse choreographed party dance, and as they prepare to go out, either she and her friends will remind you of the also-redheaded Shirley McLane and her friends,  or skirt-flipping Chita Rivera and company from WEST SIDE STORY, or both.  As an expert in the history of animation, I couldn’t ignore what appears to be a live-action version of the dance in the clouds from Disney’s SLEEPING BEAUTY.  Those are just a few examples of the films Chazelle lovingly folds into the proceedings like farm fresh eggs into a delicious cheese souffle. He is like a chef who recognizes the greats before him, then creates a recipe that uses only the best ingredients to make something both recognizable, and completely new. 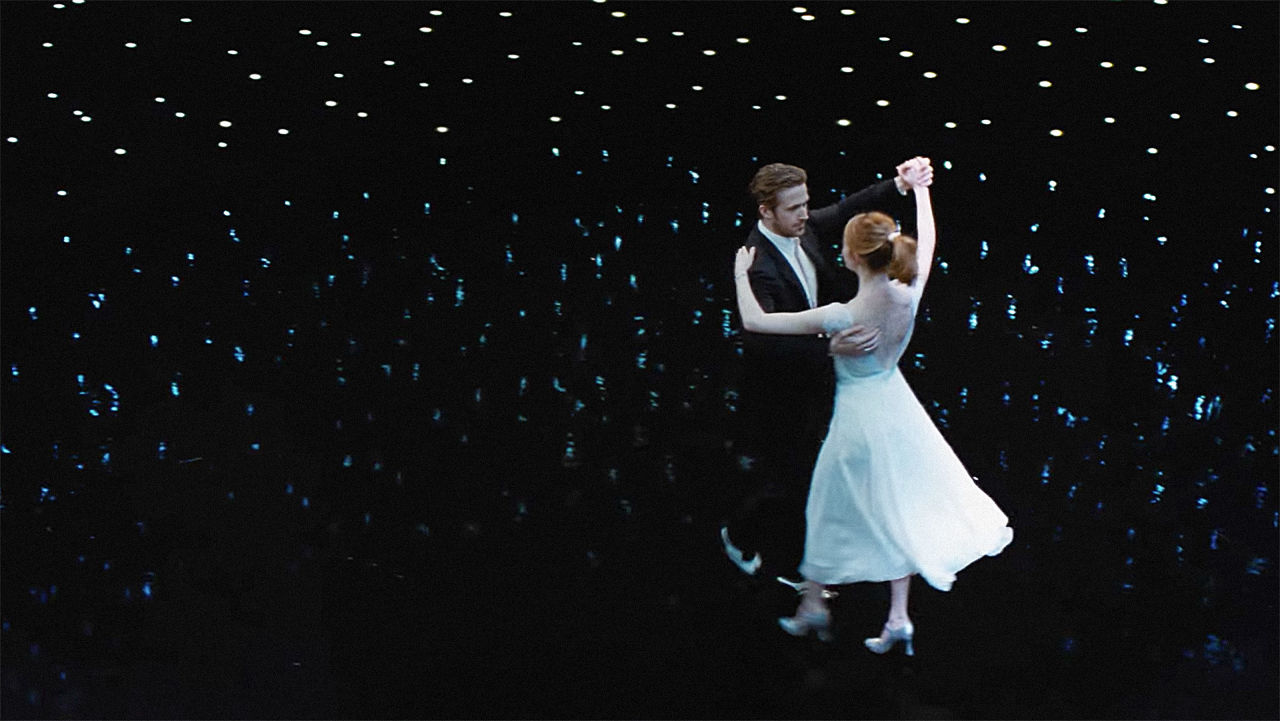 Neither Ryan Gosling or Emma Stone excel by being the best musicians or dancers.  In fact, I’d suggest they are meant to be regular people attempting to dance and sing together as they go about their daily lives.  This makes it more possible for viewers to imagine themselves in their place. After all, there is only so much time to practice dancing, doing vocal exercises, or learning to play the piano like a proper jazz musician.  Stone and Gosling demand our focus go more to their emotional delivery, and less on his piano playing or her reedy soprano voice.  Both are serviceable enough to not detract from the story, or distract the audience.  They know it is about chemistry, and getting themselves and those watching lost in the moment. They achieve that perfectly.

The songs themselves are so catchy you’ll be humming, whistling, and singing them for days.  Especially memorable are Someone in a Crowd, City of Lights, and Audition, the latter two of which will no doubt live on in thousands of auditions and karaoke nights. The credit for them largely goes to composer Justin Hurwitz, aided by the musical theater composing team du choix Benj Pasek and Justin Paul, who worked on the new Broadway hit DEAR EVAN HANSON, among many others. Pasek and Paul are already on fire, but Hurwitz will be very much in demand after this release.

With their relatively minuscule budget, it’s pretty miraculous how lush and flamboyant the movie feels from beginning to end, and it is absolutely a must-see in the theater.  In fact, there will be those who see it again and again, creating a fandom for what they might see as a happier, retro-spirited MOULIN ROUGE.  LA LA LAND vividly represents one of those rare times when a filmmaker not only succeeds in bringing a project he has imagined and hoped for to the big screen, they actually hit all the right notes. 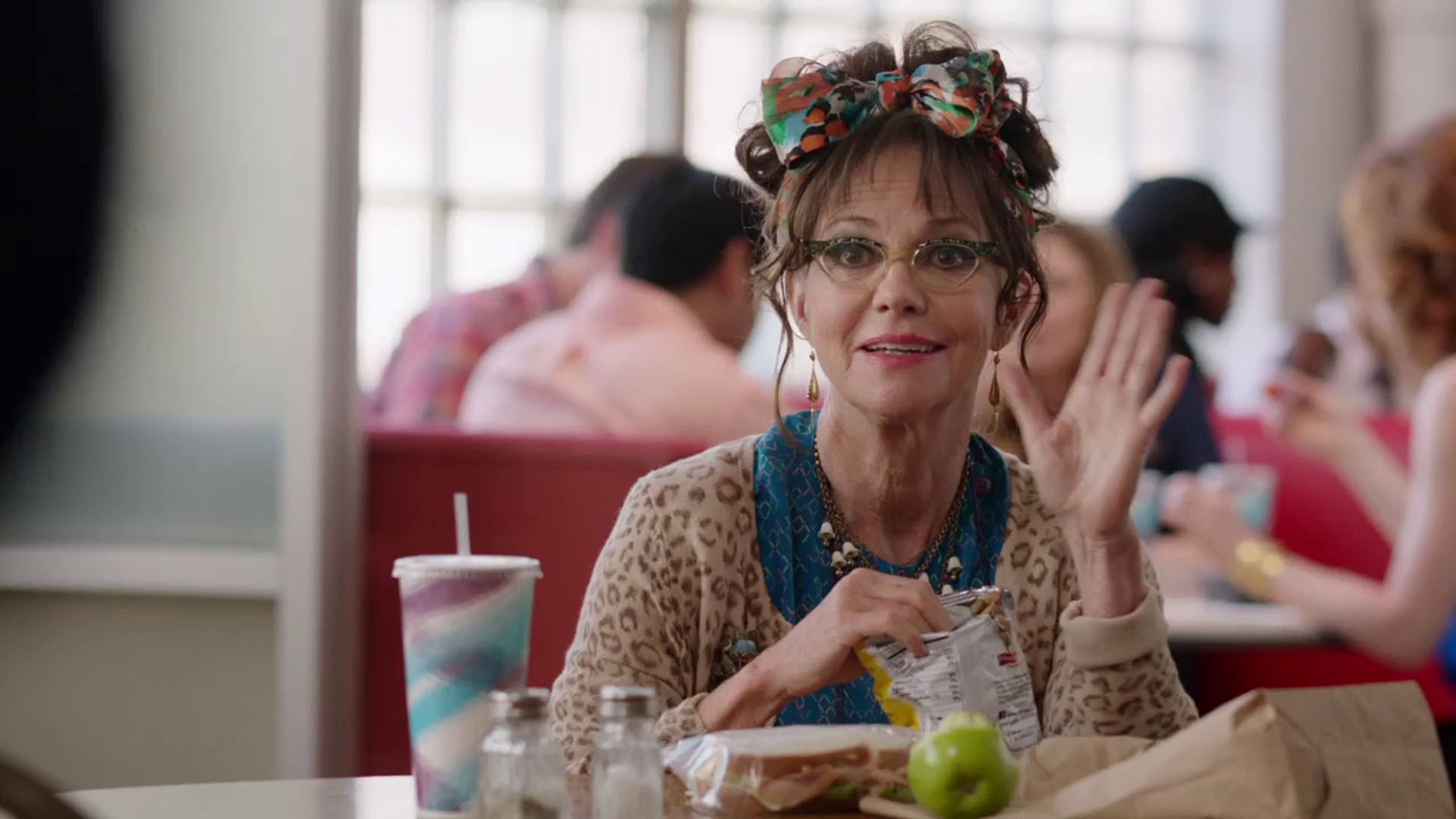 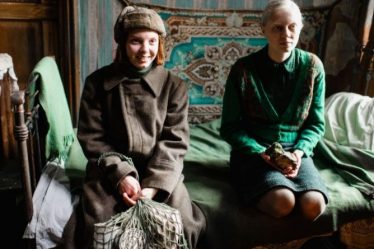