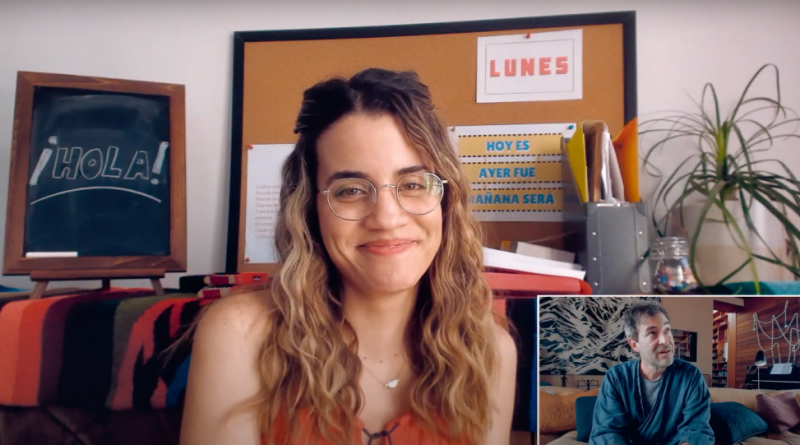 As the winner of the 2021 SXSW Narrative Spotlight Audience Award and the feature directing debut of Natalie Morales, there was a lot of buzz for pandemic indie Language Lessons. Co-starring Mark Duplass, who also partnered with Morales in writing the script, the film is the latest example of the screenlife film genre, in which all the storytelling takes place via a computer, tablet, or smartphone screen. Given that the world is universally experiencing Zoom fatigue, Language Lessons is a surprisingly poignant, bittersweet, sometimes uncomfortable exploration of platonic love, and it shows the depth and breadth of the talent of these two actors, who are tasked with keeping both forward momentum and building an emotional connection with viewers for 90 minutes. It is entirely worthy of its accolades, but should also come with a trigger warning for those still actively struggling with the pain of loss.

Language Lessons centers on wealthy Oakland resident Adam (Duplass), whose husband gifts him 100 weekly Spanish lessons, and his teacher Cariño (Morales) with whom he begins his immersion classes via internet. At the start of only the second lesson, Adam reveals to Cariño that his husband was killed in an accident the night before. Interacting entirely via an online conferencing platform, Adam’s new trauma and Cariño’s reaction to it lead these two people, who have only just met, to form a powerful and complicated emotional bond.

The connection they forge, interestingly, happens while speaking in a mix of English and Spanish, which Adam is re-learning. It requires him to consider his words and process his language, and the very act of translation means that with each word, he must dive into himself to see what he means, and how he feels. When they both switch to English, it’s because the subject matter is too emotional or raw, to try to speak it in a language whose words they don’t both intimately understand.

The way in which Mark Duplass’s Adam expresses and attempts to process his grief suggests either Duplass himself has been through a significant loss, or he has done a lot of openhearted research. Adam talks about repeatedly waking up and having to remember, again, that his husband is dead. As someone who lost a sister to a car accident and has spoken with many others who have unexpectedly lost family members, I can tell you it’s something that absolutely happens. For the first month after my sister died, I would wake up feeling like something wasn’t quite right, and after a few seconds remember my sister was gone. It was like reliving her death over and over. That aspect of the film was very difficult to watch for me, and it’s likely a number of other people will find it hard to watch as well, but that doesn’t mean it should be avoided. There’s sadness, but there’s much joy in Language Lessons as well.

To read the review in its entirety go to AWFJ.org HERE.