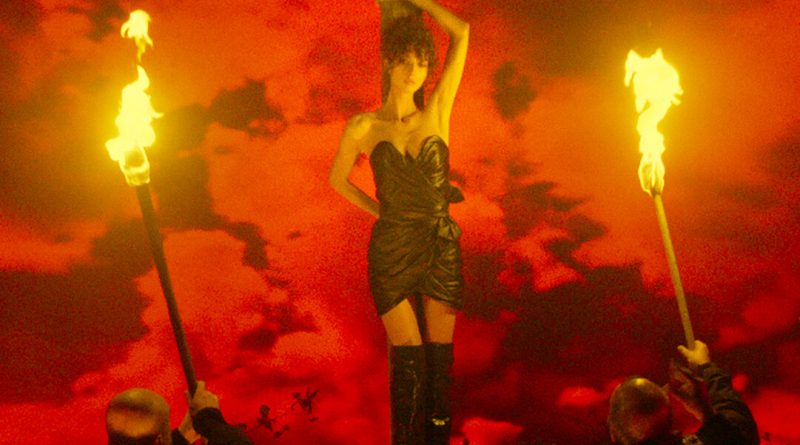 At the end of his experimental film Lux Aeterna, writer/director and provocateur Gaspar Noé plasters the line “Thank God I’m an atheist” onto the screen. As an auteur, cinema should be Noé’s chosen deity, although whether he did it dirty or created a worthy offering to that god with his movie is a matter of opinion. Known for his incendiary films that include everything from a horse being butchered (Carne) to psychedelica, voyeurism, and a scene shot to look like it’s from inside a vagina (Enter the Void), to sexual violence and a nine-minute rape scene (Irréversible), Noé looooves to offend. In fact, he has come out and said he wants people to walk out of his movies disgusted. I don’t think there’s much fear of that with Lux Aeterna, although escaping without a migraine is another matter. The warning at the beginning that the movie contains lighting not suitable for epileptics is a vast understatement. It isn’t the flashing lights or bizarre and plotless flow of it that chafes the most though, it is how Lux Aeterna portrays women, though in fairness the men don’t come off smelling like roses either. Still, like a dutiful critic, even as I felt innervated by the shrewish, hysterical characterizations of the lead female characters, I was called to consider them and the film as a whole in a deeper way.

The original idea was born as the fourth incarnation of an international art project called SELF, curated by Saint Laurent’s creative director Anthony Vaccarello. The project is meant to be an artistic commentary on society, while emphasizing individuality and self expression. Lux Aeterna’s 51 minutes open with scenes styled after German Expressionist films, as a documentary about religion and the prosecution of witches, with interspersed text about a filmmaker’s responsibility “to raise film from an industry to an art form”. From there, it cuts to a shadowed cross. Uh oh. Given Noé’s filmography, one gets the sense that he’s about to blaspheme.

We are then introduced to Béatrice Dalle and Charlotte Gainsbourg, improvising a version of themselves. They’re on the set of a film that Dalle, an actor, is directing, and the two are waiting, talking about past work and such. Dalle is talking a mile a minute. I can’t remember the last time I’ve heard someone speak so rapidly. I speak both French and English and was torn back and forth between the subtitles, (I check to see how closely they translate from French to English and how it might lose meaning or feeling in translation), and listening to Dalle rattle off her thoughts on witches, performance, nakedness, and sex to Charlotte Gainsbourg, who gets a few words in, but only edgewise.

To read the review in its entirety, go to AWFJ. org HERE.