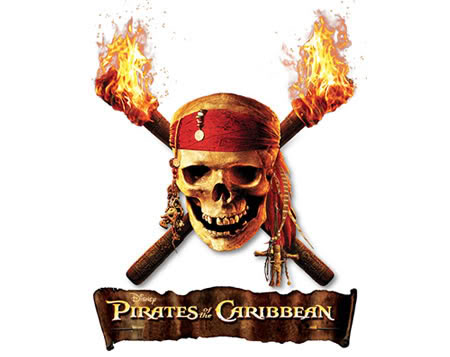 We all know the public has shown they love Jack Sparrow. They love Johnny Depp as Jack Sparrow fighting and swashbuckling and swaggering (or is it staggering) like Keith Richards in pirate regalia. Maybe they’d love Johnny Depp as Jack Sparrow reading the phone book. Whatever the case, we can be grateful Johnny Depp chose to don his garb once more for “On Stranger Tides”. It doesn’t have the magic of the first or the epic trippiness of the second two in the franchise. Naming it On Stranger Tides was a tall order. How much stranger can you get than millions of tiny creatures moving a ship across sand? Still, through deeply flawed, it is a fun 2+ hour dalliance with the irresponsible irrepressibly flamboyant pirate.

There are some notable exclusions of actors in this 4th sequel. I understand. Characters move on, get shipwrecked, become custodians to ghost ships, get run through, are forced to walk the plank, are sucked down to hell…. To this reviewer’s mind, however, the question of whether the world of POTC can remain fully formed and retain it’s heart without Will Turner and Elizabeth Swann and the previous supporting cast of plundering privateers has been answered. No. 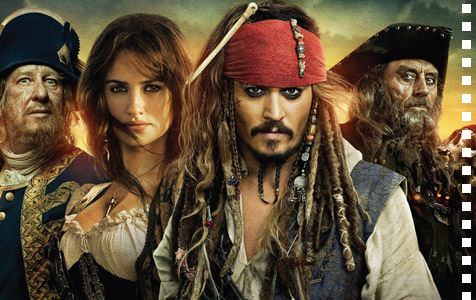 It’s not for lack of trying. There are lots of additions to this installment. Penelope Cruz is Angelica, the senorita with sass and sword playing chops who has a checkered history with Jack. Ian McShane of Deadwood plays a terrifying and blackhearted Blackbeard. The only romantic subplot involves a missionary named Philip Swift played by Sam Claflin, who is basically a stand in for Will Turner and rivals Orlando Bloom for looks, and a mermaid played by European starlet Astrid Berges-Frisbey. We never learn much about Swift and even less about the mermaid, who Swift names Syrena.

The plot matters little, but let’s just say Jack is conscripted by Blackbeard and Angelica, whom Sparrow supposedly deflowered while preparing to take vows in a convent, to find the fountain of youth. On the hunt too, is enemy turned friend turned enemy now turned friend again Captain Barbossa (Geoffrey Rush) whose search is part of a mission for the King of England. There are new shipmates and supportive pirates, but none are really memorable. The movie just becomes a race to the fountain, filled with mishaps and adventures, the best of which includes a reinterpretation of the mermaid mythology that is both hair raising and visually compelling. Blackbeard randomly has zombies working on his ship, and uses a magic sword a la Mary Poppins to get rigging set and mainsails hoisted. 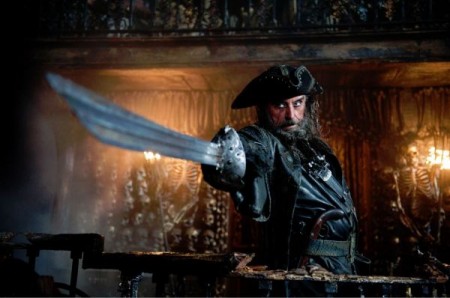 With all those additions, and all the loopy doings, On Stranger Tides is entertaining, but like Barbossa’s wooden leg, it’s hollow fun. Instead of experiencing character arcs that span the entire spectrum of emotion with a diversity of fully formed morally complicated cast members struggling through their respective moral quandaries, like Will and Elizabeth with their changing relationship and their dangerous secrets, or Governor Swann (Elizabeth’s dad) or Norrington (Will Turner’s competition for Liz’s affection) and their loyalties, our investment in the story is reduced to basically a day in the life of Jack Sparrow.

Or Jack Sparrow: the video game. 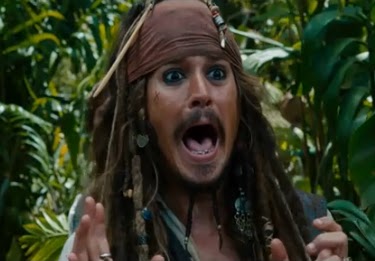 The only character from Jack’s crew who appears in this sequel is his first mate Mr. Gibbs. I sorely missed the two freaky sidekicks, Pintel (with the bad teeth) and Ragetti (with the wandering glass eye). Comic relief is a lower priority to the filmmakers in #4, which is a puzzlement. Jack Sparrow is too seemingly shallow to carry all the comedic weight and still be taken seriously or hold our favor. Cruz gets a few good one liners but has little depth herself, basically playing the female version of Sparrow. It’s too bad they couldn’t do more to make an almost completely new cast a bit more compelling. Does Hollywood really believe they don’t have to spin a yarn that can hold its own when it comes to blockbuster sequels? They’d be dead wrong about that.

Suffice to say, to those steadfastly loyal buccaneers or to the Johnny Depp obsessed, I say: forward ho!

To movie fans just looking for a well rounded, entertaining flick with a few new twists and flavors, and to those who want a little side order of substance and depth with their blockbuster entree, try instead the Shakespearean bombast and plentiful, delightful eye candy that is Thor. 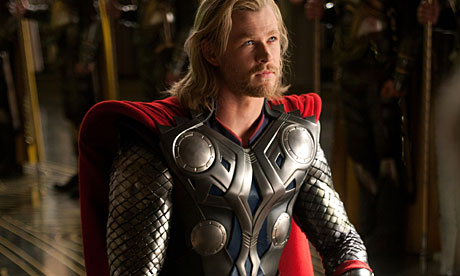 Because the new blonde god has arrived… Apparently, In the world of 2011 blockbusters, hammer beats compass.

Note~ The 3D is a waste of money on this movie unless it’s your very favorite experience, as most of the movie is filmed in dark environments, and the 3D serves to muddle the film to an even murkier overall color palette. 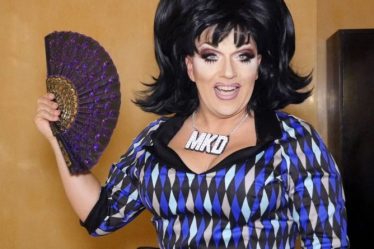