Tron: Legacy–Daft Punk and THE DUDE save a daft script. 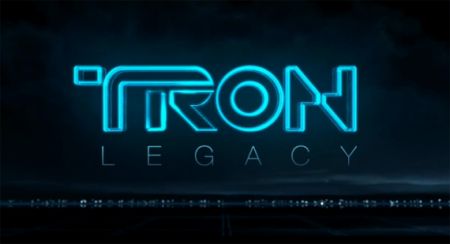 Get any geek over 40 talking movies long enough, you can almost guarantee they’ll mention the original Tron with a reverence usually reserved for the gravity fighting properties of Princess Leia’s slave girl costume. Saying it’s boring, or dated, or slow paced can end a long beautiful friendship. It is these geeks Disney was banking on when they, after over 28 years, released the sequel Tron: Legacy.

The hype machine began several years before the release, by creating a website, games, products, and giveaway swag to promote the movie to not only loyal fans of the original but the uninitiated younger movie goers. This is where Disney might have overloaded their circuits. With all that expectation, the cinematic experience of Tron: Legacy had to be profound indeed to live up to it.

If not taken too seriously, and regarded as a fun visual romp with eyepopping special effects, the movie is a great distraction and quite successful. It is one of the most enjoyable two hours anyone reserving judgement can spend, especially if the moviegoer is looking for an adrenaline rush. The 3D element amps it up to the point where we all feel like part of the grid, whether we see ourselves as “users” or “programs”. 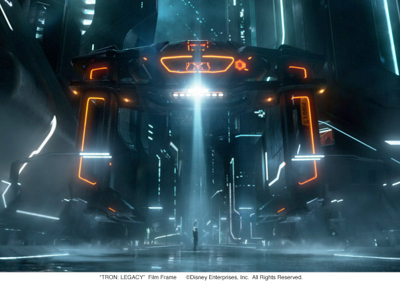 Where it fails is in its attempt to carry a message of any depth of a cohesive or consistent nature. The script is at once heavy handed and vague. Without revealing spoilers, the movie has elements of the Christian themes of creator/creation and father/son sacrifice, as well as those of humanism, political oppression and ethnic cleansing. Weighty subjects all, and to incorporate them all into a 2 hour 3D action movie is ill advised, if not the height of Hollywood hubris. It could have been far deeper than it became, and ultimately in large part crumbled under the attempt to carry those themes through the entire film. Who told them hotdog visual effects like a young Jeff Bridges and 3D motorcycle races aren”t going to wow us? What ninny told them creating a wild ride and is not enough? 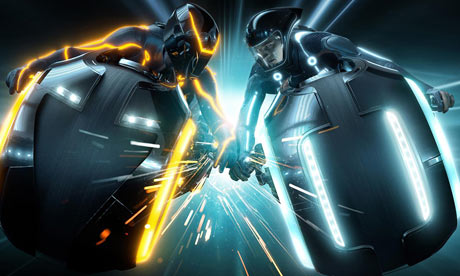 In parts the movie is trying so hard to be hip and edgy it made me squirm in my seat in embarrassment for the director. Watching the scenes with a goose-stepping Michael Sheen essentially channelling Ziggy Stardust I was reminded of The 5th Element, a movie that enjoyed its own kitch factor way more. He’s like the mom of a high school girl showing up at her school with what she thinks is latest kids’ fashion…It’s more kewl than cool. And what of character building? If we are supposed to root for Sam, wouldn’t it be better to teach us to like him first, or at least have some little idea of his inner passion? No wonder Hedlund was playing the broody model most of the movie. Maybe he was trying to compensate for the big holes in the script. As hottie Quorra, Olivia Wilde was dressed appropriately in her catsuit, since what little personality she was given amounted to feline posing and head pops. She at least does the most with her character, but we should be more invested in the quest in which she plays such an important role.

Thank GRID for Jeff Bridges! The star of the original and lynchpin of the new sequel is hot off the critical success of “Crazy Heart” and now riding the wave of his lauded portrayal of Rooster Cogburn in True Grit. Older fans of the actor are willing to see anything new, including a movie with a weak script and co-starring young buck Garrett Hedlund, who seems to use only two acting styles: angst-y and shirtless. He is way out of his depth performing any acting scenes with Bridges. Nevermind, Bridges carries him when he has to. He’s always been a gracious acting partner, and Hedlund will no doubt grow from his experience of working with him. 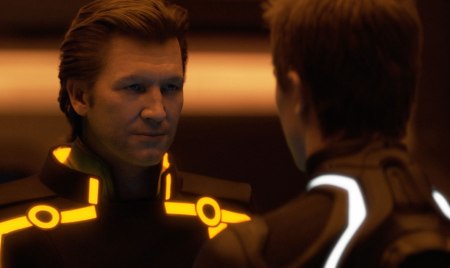 The soundtrack also plays an important role in elevating the film, which is what best soundtracks do. It is unfortunate the Academy didn’t see fit to award the French duo Daft Punk’s contribution with an Oscar nomination. The music in the trailers got quite a few music-centric viewers to the multiplex, and altered the experience of the film in a positive and significant way.**

The end result of this 3D experience is a mixture of feeling bereft, wishing it had been more, but still loving it fiercely for its visual adrenaline fueled splendor, and wanting to defend it’s every good traits. For all its failings, It is a movie that can be seen over and over, exciting and visually addictive, and if we all have to fill in a few holes where the script doesn’t quite reach its aim, it’s the least fans can do. After all, they’ve been waiting over 28 years for the pleasure…

**review updated at the time of the Oscar nominations. 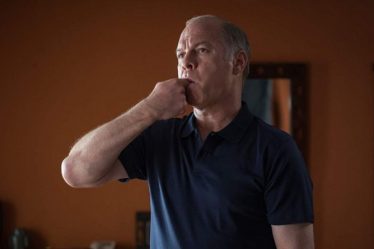