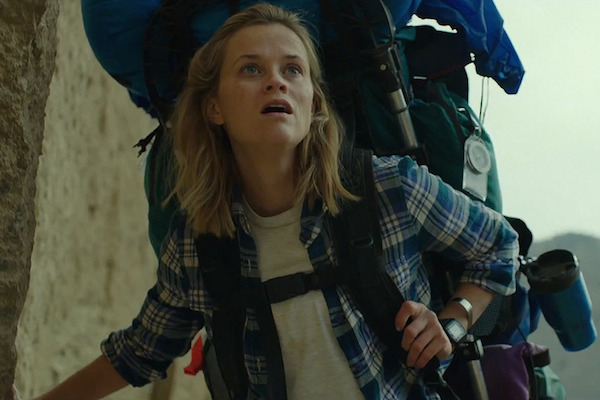 Maybe 2014 has been an ever-escalating, all positive journey of good things for a few of you, but for a lot of folks it’s been a tough and bumpy road. Particularly this year, these last few weeks of December are the perfect time for a cinematic injection of triumph over adversity, transcendence, and personal transformation. This week, that movie is Wild.
Films with those themes landing in theaters now seem like Oscar-pandering, but Jean-Marc Vallee, director of last year’s awards darling The Dallas Buyers Club, brings authentic feeling and gravitas to us with his new release Wild, blazing a trail straight not only into the hearts of audiences but potentially onto the ballots of Academy voters.
The film, starring the at-her-best Reese Witherspoon, is based on the memoir “Wild: From Lost to Found on the Pacific Crest Trail” by Cheryl Strayed about her descent into self-destructive and dangerously addictive behavior after the loss of her mother and her decision to hike over 1100 miles alone, to face her demons, reflect on her grief, and find the joy inside her again.
Director Vallee gets help from a well crafted screenplay by Nick Hornby and cinematography that captures the vastness, cruelty and grandeur of nature, supplied by Yves Belanger. Witherspoon brings the audience with her as she finds her Hollywood mojo again in a meaty role that spans the entire spectrum of emotions. As her mother, Laura Dern embodies the kind, luminescent caretaker that explains Strayed’s well-founded grief at her loss.
Wild succeeds where few films do, in capture the difficulty and threat of a potential permanent hopelessness from losing a loved one. Vallee is known for wringing the best performances from his leads, and choosing his co-stars to create the best ensemble casts. He keeps his reputation intact for that here as well.
If there is one trouble spot for the film, it is in building full connection with the somewhat unlikeable lead character by not showing the devolution experienced early in her loss that leads to her self destruction through heroin and sex addiction. That may be why some viewers have a hard time buying Witherspoon, she of the former “America’s sweetheart” rep, as someone who offers quick alleyway lays and shoots heroine in between her toes. For my own part, I know enough clean-cut upper class gals who look like sorority sisters that have nearly killed themselves with heroine and lived to kick the habit. I believe anyone suffering enough, including Reese Witherspoon, is not immune to it. Her casting make sense to me, having known those women.
It is important to note that Witherspoon adapted Wild through her new production enterprise, Pacific Standard, a company she started in order to find and release movies with more substantial, dynamic roles for women. Pacific Standard also produced this fall’s blockbuster Gone Girl, directed by David Fincher. Clearly we can expect other strong female-driven films from Pacific Standard, and women who look for multi-faceted characterizations in film will be rewarded by Witherspoon’s determination to bring desperately needed diversity in Hollywood.
This Holiday season, some may have lots of great parties and happy experiences with their families, and perhaps this film is not as appropriate as the more lighthearted fluffs inevitably available this time of year. If a deeper, more powerful experience is needed, though, Wild fits the bill. Those who sink themselves into Award season viewing, may actually need something of a more positive nature, as will those who struggle with frequent and sometimes divisive family interactions the holidays bring. Wild is great for that, too. How nice to have a powerful woman-driven story about determination and fearless forward movement to get us all through to January.
Thanks for pulling a movie like this together, Reese. Cinema Siren, appreciates it more than you’ll know…and welcome back to the top of the Hollywood mountain. Thanks, too, to Cheryl Strayed, whose life-transforming hike helped you climb but up there.
4 1/2 out of 5 stars.