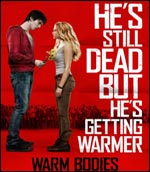 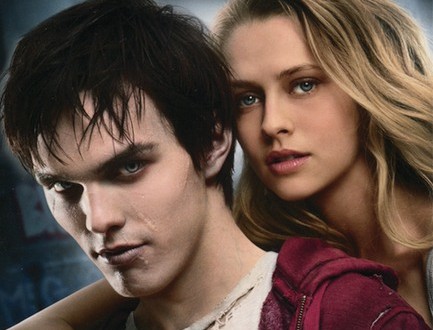 No, it’s not an ode to necrophilia. It is a charming and whimsical movie that goes deeper than anyone would expect about connectedness, trust and a willingness to change.

I never thought I’d say “this zombie flick is a great date movie,” but now I have. As a matter of warning, it should be rated “Z” for brain-eating zombies. Still, a large cross-section of movie lovers will enjoy it, making it a far better choice February 14th than that new Diehard (coming out that day! Wah?), for everyone from girlfriends hanging out and Twihards, to couples who don’t mind a bit of edge in their flicks.

To all those who have heard or bought into the press about it being a wannabe Twilight clone, I say yes, the Twihards will appreciate it. But it will be even more appreciated by all of us who grew tired of Twilight’s whining and negativity (however much it was dressed in sparkle), and those of us who wanted to scream at that mopey sad-sack Edward to suck it up and get an afterlife.

Warm Bodies plays fast and loose with zombie rules
Here, in this movie, the undead are anything but resigned to their plight. Warm Bodies has an optimism, unabashed romanticism and earnestness that is perfect for a holiday about love. It might be too much for the most cynical filmgoers, even with the dried blood and rotting body bits with which it’s smeared.

Stay far away if you only like your zombies terrifying and the stuff of nightmares. Stay away as well if you are a stickler for the rules of zombie-ism, as you will find Warm Bodies plays a little too fast and loose with those rules. As yet another mash-up, this time of zombies and coming-of-age romcoms (a “zomcom,” if you will) Cinema Siren does believe it adds something worthwhile to both genres.

The story is about R, a zombie who lets us into his conflicted, less-dead-than-we-think brain, as he trudges with the rest of the rotting pack. He takes a Cupid’s bullet to the heart when he sees gun-toting Julie, out with her med-foraging friends, about to become the next zombie Happy Meal. He rescues her and whisks her away to the nick-nack-filled jet airplane this nostalgic zombie packrat calls home, where they share a few sweetly awkward days and nights getting to know each other. 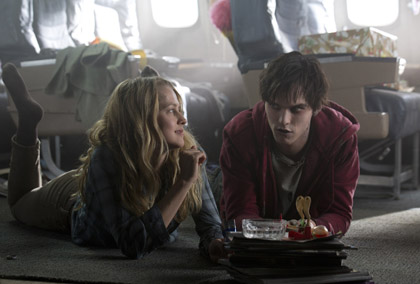 Actor Nicholas Hoult, as ‘R,’ is the star
Love spreads like a scarlet pillow… The rest of the movie is them against the world, which includes Julie’s protective dad (the underused John Malkovitch), a post-apocalyptic general with a quick trigger finger for all things undead.

Aussie ingenue Teresa Palmer, who forever strains against the label of the “blonde Kristen Stewart,” does well enough as Julie, the love interest for an undead 20-something who finds he feels more and more alive when she is near.

R is the star. Actor Nicholas Hoult (About A Boy, X-Men: First Class) is the one who must carry the film on his slumped and shambling frame. He plays a character who feels isolated, misunderstood and trapped inside a shell that belies his inner sweetness. 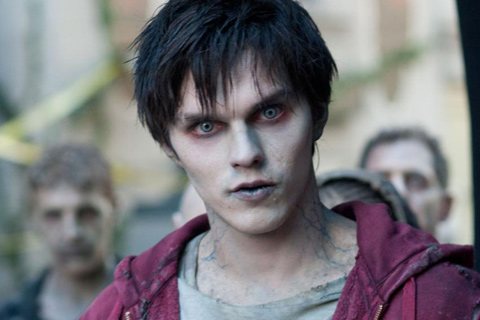 Director enhances novel on the big screen
It’s probably hard to make friends and make time when you smell like death, speak in grunts and eat human flesh to survive. He works his way through a wide range of emotions, in scenes that require him to play both broadly and with subtlety in quick succession. With natural talent, expanding skill and now adult and undeniable good looks, Hoult will catapult himself into position as an “A” actor with his pick of constantly revolving projects. 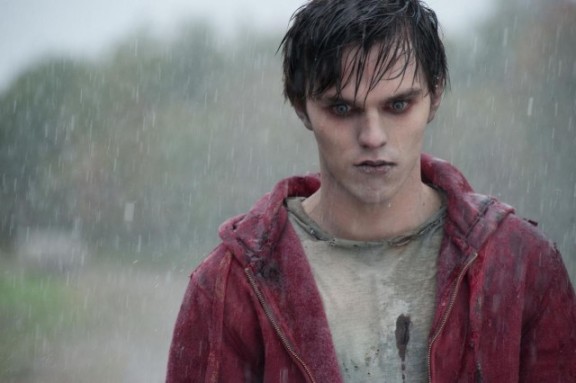 Rob Coddry’s “M,” R’s “BZF,” allows the actor to bring his great character acting and perfect timing to the proceedings, and gets big laughs that mean his memorable role might quickly become a fan favorite. He makes impressive use of scant screen time, further perking up the auds with his every arrival.

Director and screenplay writer Jonathan Levine (who made the surprisingly successful cancer dramedy 50/50) makes the depth of the original novel, written by Isaac Marion, translate very well to the screen, keeping and sometimes even enhancing the metaphoric lessons both great and small, which range from tackling racism and bigotry, to youth alienation, to cocooning and isolation in the computer age.

There is also a literary reference you might already have heard about or figured out that is far more meaningful if you know well the original from which it takes inspiration.

Soundtracks builds emotional atmosphere
The soundtrack proves to be a mix of clever and poignant. Levine allows the music, some of which is made up of cheesy ’80s hits you’ll never hear the same way again, to be an integral part of the scene. It builds an emotional atmosphere and adds a component that connects with the audience during the extended times where voiceover narration and slowly shuffling zombies might call a screeching halt to the movie’s forward movement. The best soundtracks do that.

To be sure, the end of the movie arrives in a swell of sweet that might as well have us all singing Todd Rundgren’s “Love Is The Answer,” but that’s what romcoms do. The difference is this is a zomcom. Either you can abide this funky freaky little film, with its conceits and exposed beating heart or you can’t. 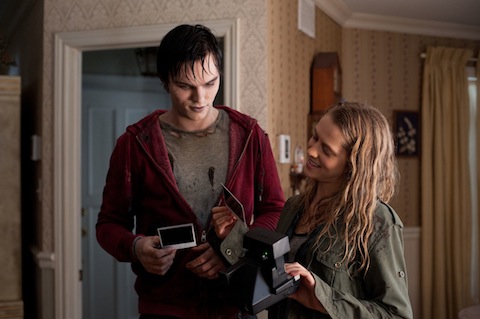 I can, and I absolutely loved it. You might find you do, too. One thing’s for sure, your significant other is probably not going to be willing to sit through The Walking Dead on Valentine’s Day. With Warm Bodies, you get zombies and love, all tied up in a big bloody-caked bow. Make it a Valentine’s Day present to yourself. 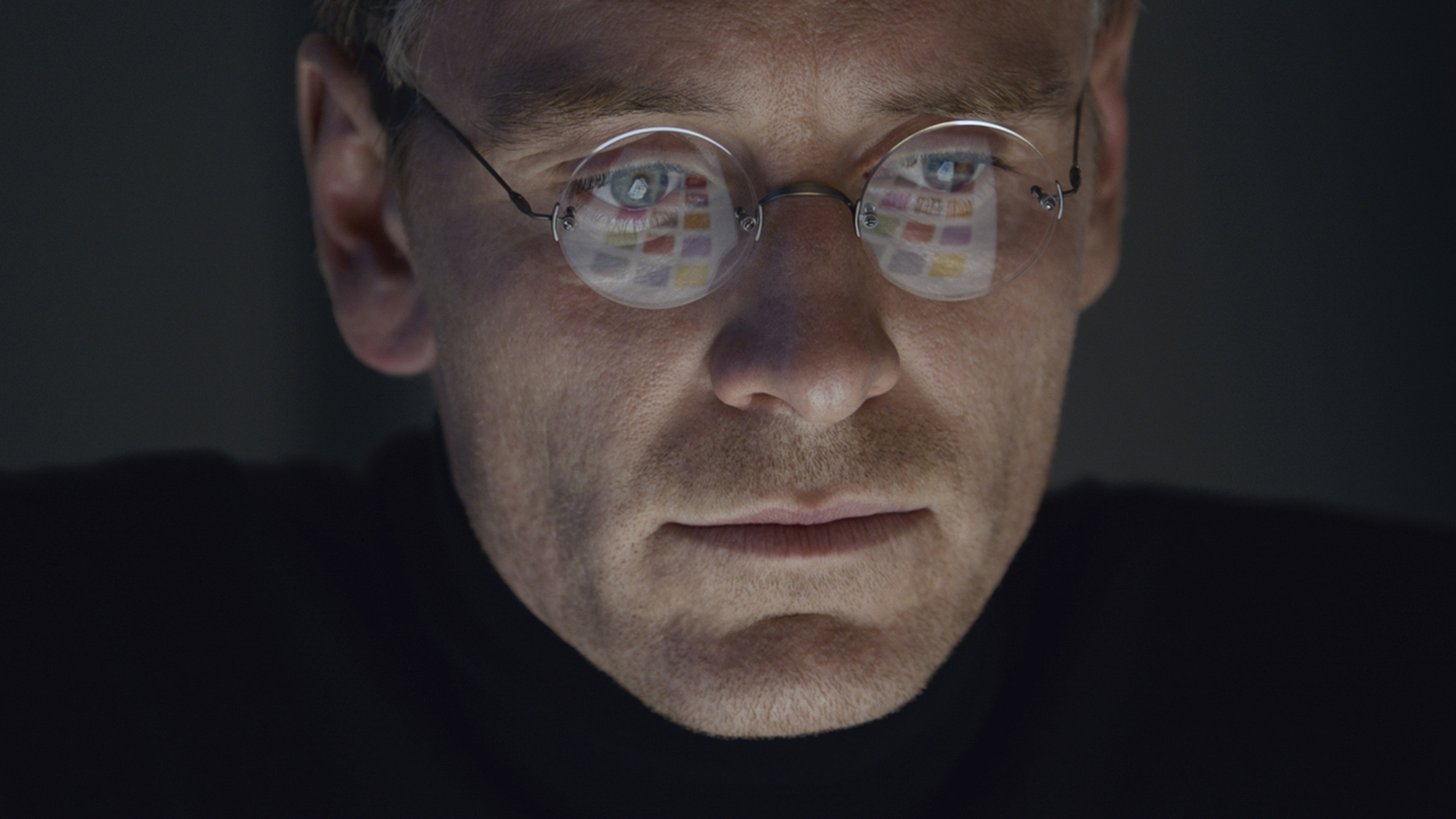